The History of Millbridge WI and its forerunner, Frensham WI

Frensham WI was formed in 1921 and they continued their afternoon meetings until December 1987. 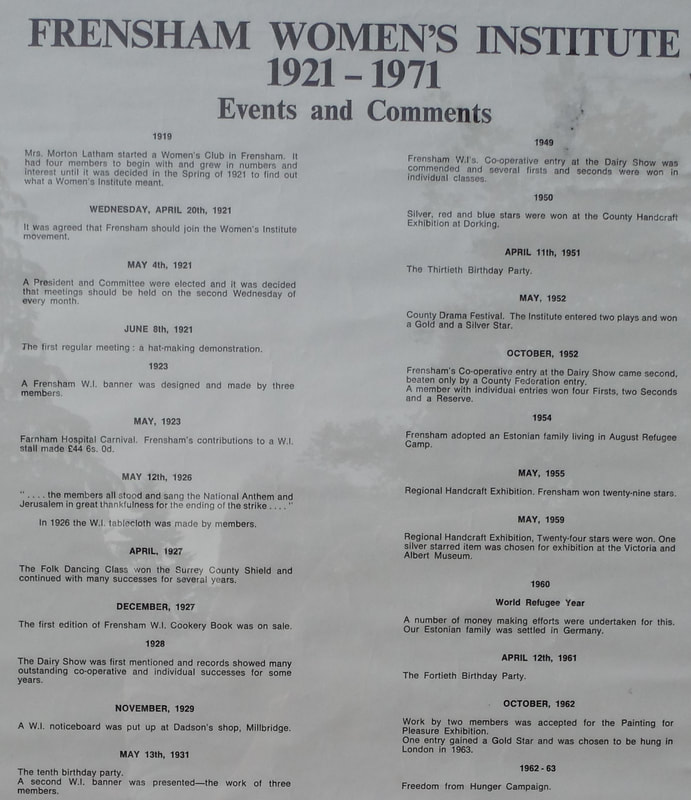 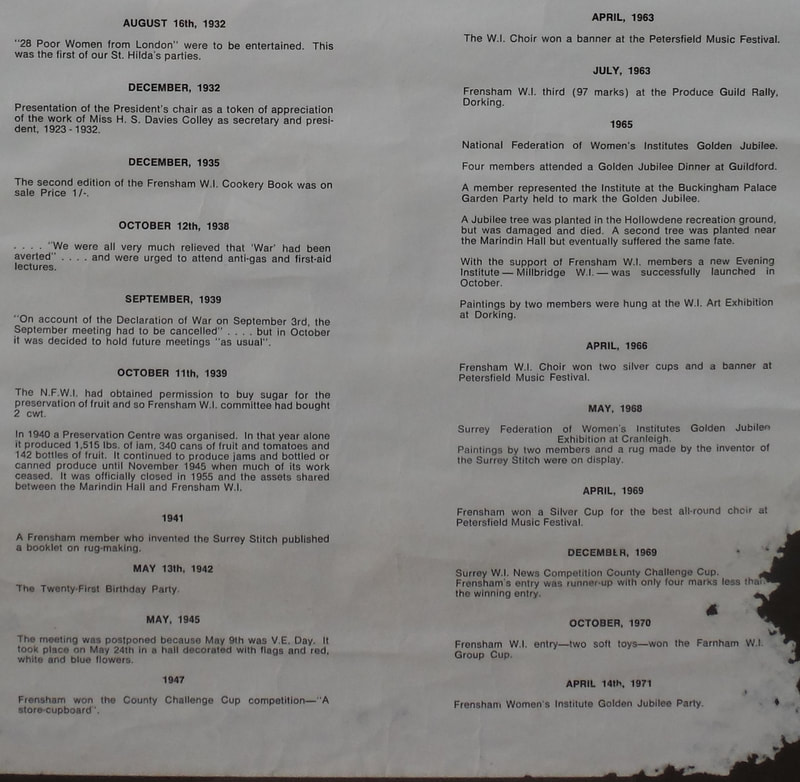 I joined Millbridge WI on 30th September 1965 at the first meeting and promised to pay ‘the treasurer of the institute the sum of 5/- yearly while I continued to be a member'. It seems as if they’ve moved the goal posts.  At the election for officers Mrs Summers was President, Joan Harris was Secretary and Mrs Outlaw Treasurer. I was elected onto the committee, as was Agnes Stock.

Here are some comments from the first record. It was explained by the visiting VCO “that of our 5/- only 1/6 remained with the institute and even that wouldn’t last long after paying for hall, speakers, pooling of fares, telephone, stamps etc. so we would have to do some fund raising. Nothing has changed over the years!  A jumble sale was promptly booked for Saturday 22nd January. The minutes record that Mrs Kenchington was to be in charge of the junk stall. This was crossed out and replaced with the words ‘white elephant’. The takings were £60/4/6 with an I.O.U. for £1/7/6.

The first committee meeting took place on 11th November 1965.  I read that I had “volunteered” to be assistant treasurer.  How naïve I must have been!

We started with a total of 65 members, then at the December meeting 7 new members were enrolled.  In January, Dot Othen joined, in February another 6, and in March another 2.  We expanded rapidly.  In 1967 Freda Booy & Nancy Taylor joined, followed by Mary Embling in March 1968.  In August 1967 two members had babies; one of them was the President, and she only missed one meeting!

In June 1969 BAMP (predecessor to BAMB) was suggested and on 6th August at Frensham recreation ground, Millbridge won the first game of rounders. This year we won the cup.  We're not so energetic now but we’re still winning.

I’ve enjoyed belonging to Millbridge WI. I’ve learnt a lot and made many new friends.

The committee meeting on 7th December 1987, is as follows;  Minutes were signed by D.Q. Pullinger (it is assumed the owner of Frensham shop at the time).